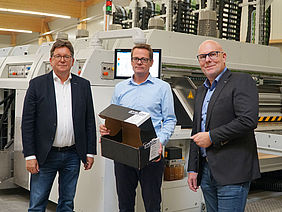 Successful business start-ups are usually driven by “insiders”, people who have grown and advanced within a particular industry through training and experience and who have a passion for their industry. Sometimes, however, the passion is for entrepreneurship itself; this certainly applies to Henning Spilker: After twelve years as a management consultant, the graduate industrial engineer decided to set up his own company. After thorough analysis of potential growth opportunities, he decided to go into the business of manufacturing corrugated cardboard packaging. On January 1, 2012 he started PackConcept, installing second-hand machinery in a 750-square-metre facility in an industrial park in Lübbecke, northern Germany. "Cardboard boxes have a future", predicted the 53-year-old company owner, and he was right. Only weeks later, he had to rent a further 500 square metres, and 15 months later he moved his company to a 1700-square-metre plant with an expanded machine park. The basic boxmaker and inline casemaker were now joined by a rotary die-cutter with a feed width of 1700 millimetres and another boxmaker with a feed width of 2400 millimetres, as well as a scoring and cutting machine. Between then and 2019, PackConcept doubled its sales, and in May 2020, the company made yet another move, this time into a 2500-square-metre facility, still in Lübbecke. Here Henning Spilker, now with 14 employees, is working towards a sales target of 1.7 million euros. 30 percent of the revenues come from the webshop www.ichbrauchkartons.de (“Ich brauch(e) Kartons” translates as “I need boxes”). 70 percent is generated by orders from industry and commerce in a wide variety of sectors – retail, furniture, printing and media, but also metal, glass and plastics processing.

Up to now, bespoke die-cut packaging has made up roughly a quarter of PackConcept’s total order volume, while standard folding boxes from FEFCO 0201/0202 layouts have made up the lion's share of production. Henning Spilker’s target is to increase the share of die-cut packaging in his sales mix because of its higher added value and the growing demand for customised packaging. “We plan to concentrate our sales activities here,” he says “Our aim is to reach a greater range of customers, including industry bulk buyers."
In order to be able to offer the necessary capacity right from the start, Henning Spilker has invested in a new RD 115S rotary die-cutter from KOLBUS. It is the first such machine on the European market, although the machine concept itself is a tried and tested one. In 2011, KOLBUS took over the US manufacturer Hycorr, which had for decades produced rotary die-cutters for corrugated board exclusively for the markets in North, Central and South America. Under the KOLBUS umbrella, the machines were completely reengineered and upgraded. In addition to the introduction of the globally used metric system, this also included the changeover to decentralized servo drive technology for all production-relevant axes and a state-of-the-art electronic machine control system with a high level of automation. The machines are now more user-friendly and they naturally comply with all international safety standards, such as the CE standard. The RD 115S has a feed width of 2921 mm so that it is possible to process up to four blanks per sheet of corrugated board. Together with its processing speed of up to 12,000 sheets per hour, this makes the machine an attractive solution even for large-volume orders of 100,000 units and more. The core strengths of the RD 115S lie not only in high-performance die-cutting but also in the printing process. It can operate with up to eight flexographic printing units, with the option of adding top print units for double-sided printing. Initially, the pilot machine at PackConcept has three flexo print units to print even large designs on the outside of boxes.

Henning Spilker was impressed not only by the performance of the RD 115S but also by the high quality of its output. "Precise guidance and slip-free transport of the sheets in the machine ensure very good register accuracy from printing to die-cutting, and therefore result in products of the very highest quality," he comments. "The level of workmanship, the quality of the components and the know-how of the KOLBUS specialists represent the best of German engineering!" This is an assessment that Wilfried Kröger, CEO of KOLBUS, finds very satisfactory. Explaining the KOLBUS approach, he points out, "Working with PackConcept, we have a unique opportunity to test and optimize our new rotary die-cutter under regular production conditions. We are also able to use the installation for customer demonstrations."

The first step towards this win-win situation was the installation of a KOLBUS Autobox AB for standard folding boxes as part of PackConcept’s most recent expansion and its move to the new building. The first contacts between the two companies date back to 2018. At that time, KOLBUS was looking for partners to help establish its new machine portfolio for corrugated board processing in the market. Henning Spilker recognized the potential of a cooperation with the traditional mechanical engineering company from Rahden. "KOLBUS is a valuable, strong partner with huge expertise," he says. The advantages were already evident during the installation of Autobox AB: "The support was unparalleled; smaller problems, for example, were solved immediately on site or through remote diagnostics,” remembers Spilker. The Autobox AB is the third boxmaker to be installed at PackConcept. With a working width of 2600 millimetres and equipped with an autofeeder, multicut and flexographic printing unit, the machine has significantly expanded the company’s production potential. Henning Spilker again, “We would be delighted if in future we were again involved in pilot projects with new KOLBUS machines. I'm very keen to see what direction development is taking. Perhaps we shall even see a fully automated "inline” system.